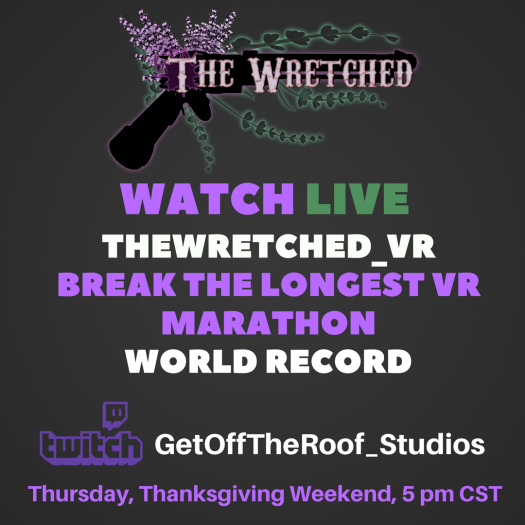 This Thanksgiving Weekend, one of our Co-Creators Mike Kantack will spend 50 hours in MakeVR working on 3D models for The Wretched, a space western horror VR game.

While working he will follow strict Guinness World Records guidelines so we can be record breakers!

You can follow the attempt by tuning in LIVE to the Get Off the Roof Studios Twitch Account. (Starting 8am, Friday, November 24th KST): http://bit.ly/2A14ReV.

During the LIVE broadcast, the creators and team members will talk about story and gameplay. This will also include the release of the first official trailer.

The current record is held by Jack McNee; at 36 hours, 2 minutes and 16 seconds. Jack played Tilt Brush for his attempt in April 2017. Learn more: http://bit.ly/2yHJDhW

Find out more about our game by checking out our site and our social media pages!